I was organizing my craft room a little while ago and found several WIP’s that I had completely forgotten about – including this pair of socks:

Cute, right? Abandoned about midway up the foot, I have no recollection of why I stopped knitting them. So I tried them on, did a little measuring and math, and discovered that the “slight snugness” that I felt when I tried them on meant I had made a grievous gauge error and they would not end up being socks I could wear.

Now, I don’t remember if I discovered this and then stashed the socks away in time-out, or if I would have continued knitting in blissful ignorance, but either way: this newly-found WIP was not destined for success, and so I frogged back to the toes and added 8 stitches to the circumference (a full inch at my gauge).

Little did I know that those eight stitches would completely change the way the yarn behaved. This is the left sock in the picture above, now with more stitches: 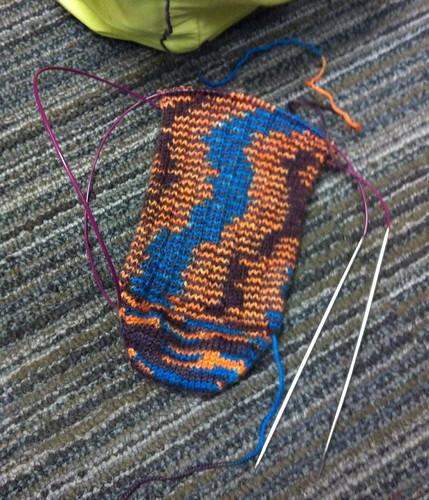 Same stitch pattern, same needles, same knitter, same gauge; just eight additional stitches in each round and the nice variegated yarn turned into meandering rivers of color. Crazy sauce. I’m keeping them, though; my initial misgivings over the obvious pooling have grown into a whimsical acceptance of this colorway. And I can’t wait to see what happens when I increase for the heel gusset.

You want random? You got it. Mostly knitting and gardening, with some home improvements, pets, baking, family, and the occasional bad joke thrown in for good measure.
View all posts by wonkydonkey →
This entry was posted in Knitting & Crochet and tagged knit, knit socks toe-up. Bookmark the permalink.
%d bloggers like this: