Seeing as how tomorrow is Easter, I figured I’d better make some hard boiled eggs — and why not color them with natural stuff we already had around the house? I raided the spice cabinet, the freezer, and my soap room, and gathered up seven jars to experiment in. 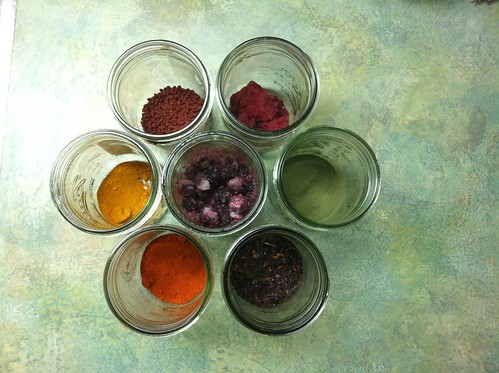 In the center is frozen blueberries. Around the perimeter, clockwise from the top left is annatto seed, beet root, nettle leaf, hibiscus, paprika, and turmeric. I put 1-2 Tbsp of each into a jar, added 1 cup boiling water, and 1 Tbsp vinegar. Then I dropped an egg into each jar and let them sit awhile, checking on them every couple of minutes to see how they were coming along. 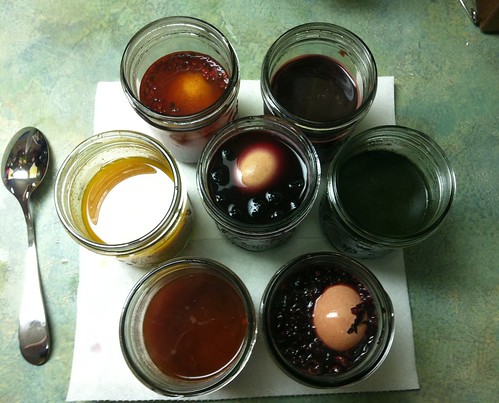 The results were mixed. The hibiscus was the most disappointing; it created a weird film on the outside of the egg that wiped right off (it’s the egg in the lower right, that is practically white). I wonder if I should have strained out the flowers first? The three on the left ended up all being similar, and the nettle leaf left a soft olive/khaki color much more subdued than I expected, considering how bright the herb is. The blueberry and beet root took well. All in all, a fun little experiment! 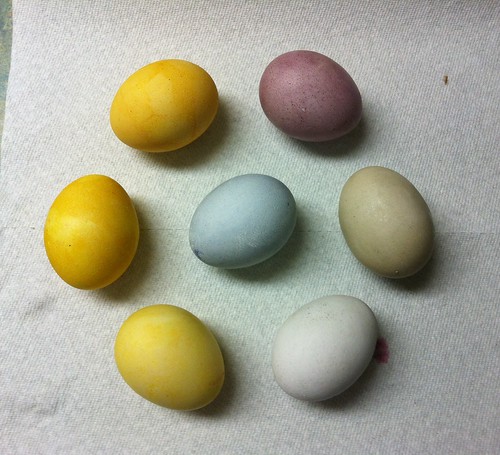 You want random? You got it. Mostly knitting and gardening, with some home improvements, pets, baking, family, and the occasional bad joke thrown in for good measure.
View all posts by wonkydonkey →
This entry was posted in Family nonsense, Just Plain Silly. Bookmark the permalink.
%d bloggers like this: