Not exactly a success

A couple of weeks ago I ran across a video that showed how to scramble eggs inside the shell before you boil them.  I was intrigued. I enjoy eating hardboiled eggs, but will admit that the differing textures and flavors between the white and the yolk can be off-putting for folks. Plus, it’s difficult to chop one up to put in salads (and by “difficult” I mean “difficult for me to do without mangling the yolk and making a hideous mess of the whole thing”).

Since I was boiling eggs yesterday anyway, I decided to give this method a whirl (so to speak). I found a stocking, chose four fresh eggs, and spun them silly. Amelia was intrigued by the whirring sound, but less than impressed when I showed her the egg inside the sock. I don’t know what she expected, but it certainly wasn’t an egg.

Anyway: I proceeded the boil the spun eggs along with the un-spun eggs. As the water heated, I suddenly heard a “POP!” and was dismayed to see that one of my spun eggs had exploded. As I was lamenting this development to my housemates, a second “POP!” resonated, followed quickly by a third.

Foamy eggs whites oozed into the water, creating an unpleasant scum on the water and coating the side of the pan. Not very appealing. After cooking, I rinsed everything off. 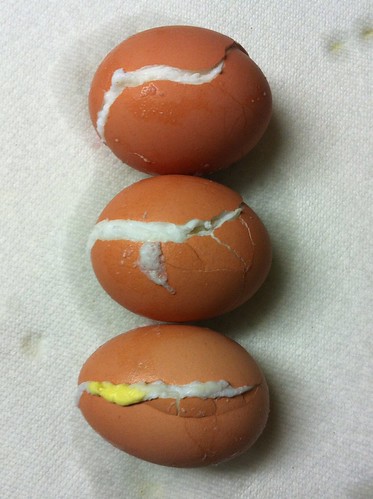 After a night in the fridge, I decided to see how they turned out. A hardboiled egg would go well with my toast, I figured.

The egg put up quite a fight. A bit of water leaked out as I peeled the egg. 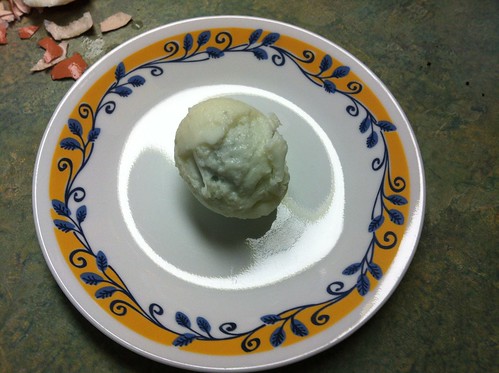 and inside? Well, definitely not scrambled. The yolk is oddly shaped, but still intact. 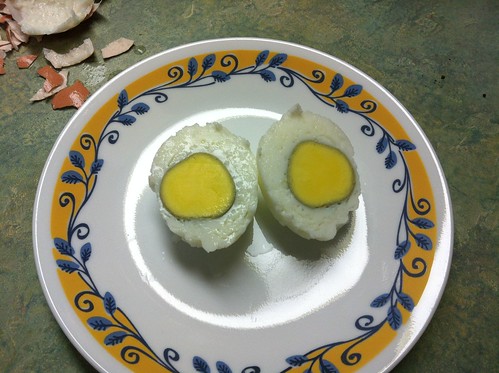 And if you look closely you will see that the whites are full of air bubbles. When I ate the egg I was dismayed to find that the whites were indeed “whipped” while the yolk was denser than usual.

I still think this could work, but I think perhaps the stocking doesn’t hold the egg firmly enough for the yolk to break up. I found another video, this time using a tennis ball to hold the egg, and I think I’ll give that a try sometime.

You want random? You got it. Mostly knitting and gardening, with some home improvements, pets, baking, family, and the occasional bad joke thrown in for good measure.
View all posts by wonkydonkey →
This entry was posted in Family nonsense, Just Plain Silly, Random Thoughts, Recipes and tagged eggs, hardboiled, scrambled in shell. Bookmark the permalink.

1 Response to Not exactly a success