Posted on December 6, 2014 by wonkydonkey

Two months in to the Temperature Scarf now – just a wee bit over 16%. The first five days of December were quite erratic, with temps jumping all over a fifteen degree spread. Makes for more colorful stripes. 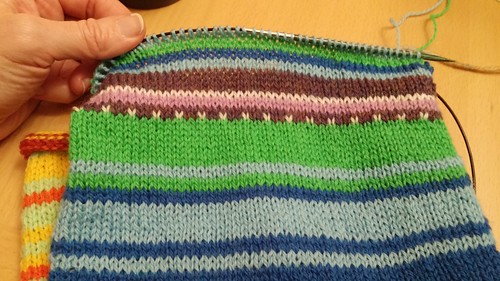 The scarf measures 16″, so I guess this will end up being roughly eight feet long. Wowza!

In other news, we got our tree out of storage today; it’s up and plugged in though it’s otherwise naked yet. The cats were unimpressed with the tree-raising process, but after it was up Amelia spent some time hunkered beneath it (perhaps testing its merit as a hiding place) while Snickerdoodle flatly ignored it. She much preferred it in the bag.

You want random? You got it. Mostly knitting and gardening, with some home improvements, pets, baking, family, and the occasional bad joke thrown in for good measure.
View all posts by wonkydonkey →
This entry was posted in Knitting & Crochet and tagged Knitting, stripes, temperature scarf. Bookmark the permalink.