Kismet stepped in and the day after I spun up that lovely sport-weight yarn, I read a  post from The Sock Monkey wherein he blogged about his new cowl pattern, and I immediately knew that the Juliet Poe Cowl was the perfect pattern for my new handspun. The right yardage, near to the right weight (cowls are forgiving with minor gauge differences), and just enough color variations to really stand out. You don’t have to twist my arm when the knitting gods speak! I was trapped under ten pounds of napping kitty, so I went ahead and cast on. 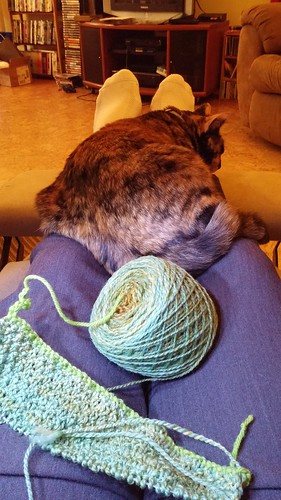 It’s a simple moss stitch with slip-stitch edges, so it moves along nicely and I knit while watching a couple episodes of Seinfeld. 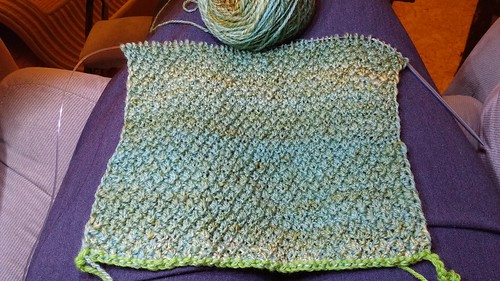 I really like how the color variations show up in this, and the stitch helps camouflage my not-quite-even spinning. My cowl is turning out about an inch taller than the pattern specs, but that’s just fine.

You want random? You got it. Mostly knitting and gardening, with some home improvements, pets, baking, family, and the occasional bad joke thrown in for good measure.
View all posts by wonkydonkey →
This entry was posted in Knitting & Crochet and tagged cats, cowl, handspun, knit, spinning, wool. Bookmark the permalink.