Three out of four

Posted on February 6, 2015 by wonkydonkey

The two crocheted Seahawks hats I made a couple weeks ago were for my sister and her son. After finishing them, I asked my sister if her other two kids would want Seahawks hats as well, because I remember very well how important it is that things be FAIR and EVEN among siblings. Even if they didn’t want hats, it was important that I ask.

I was pretty sure the younger niece would not want a Seahawks hat, but the older niece was a toss-up. I offered alternative color schemes and received a prompt reply: the younger one would prefer pink and purple. 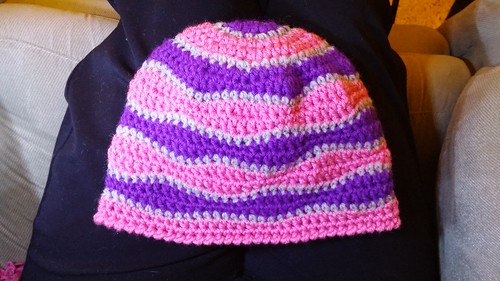 What kind of auntie am I to deny a pink and purple hat?

The older niece decided on a Seahawks hat, and a certain fur ball decided I needed some help.

I think she was secretly hoping I was making a blanket for her to snuggle under. Despite the extra help, I got the hat done pretty quickly and decided that it needed a little extra something. 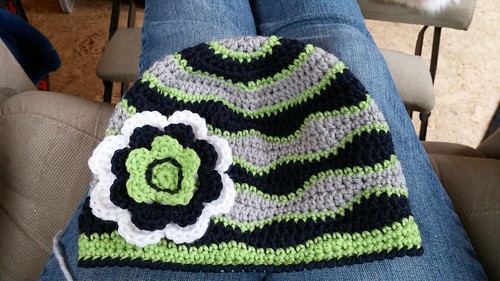 Super cute!  There isn’t much of the navy blue yarn left, but I still have grey and green, so I could make another hat; I may have a lighter shade of blue in the scrap basket (something more like the old Seahawks blue) that I could use with the grey. Making the hats was fun;  they were fairly easy and surprisingly quick once I got back in the swing of crocheting.

You want random? You got it. Mostly knitting and gardening, with some home improvements, pets, baking, family, and the occasional bad joke thrown in for good measure.
View all posts by wonkydonkey →
This entry was posted in Knitting & Crochet and tagged crochet, hats, seahawks. Bookmark the permalink.

2 Responses to Three out of four