The land of fog and water

The Ski Socks are in time-out, the wool skirt is too bulky to be commuter knitting, the colorwork hat is charted so there’s no way I can drag that along to knit on the train, I’m studiously ignoring the other WIPs stashed in various project bags in my craft room (most of them are also too large for commuter knitting) and so: I started a “Dots or Dashes” cowl. I’m pretty sure I got the pattern and yarn during last year’s LYS crawl. No pic yet, I just cast on yesterday, so here is what the view looked like this morning from my office: 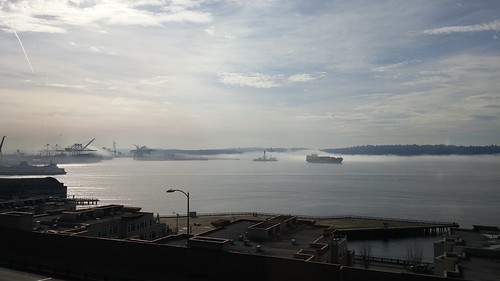 Pretty neat, with the ships playing hide-and-seek in the fog.

You want random? You got it. Mostly knitting and gardening, with some home improvements, pets, baking, family, and the occasional bad joke thrown in for good measure.
View all posts by wonkydonkey →
This entry was posted in Knitting & Crochet and tagged fog, knit. Bookmark the permalink.

2 Responses to The land of fog and water