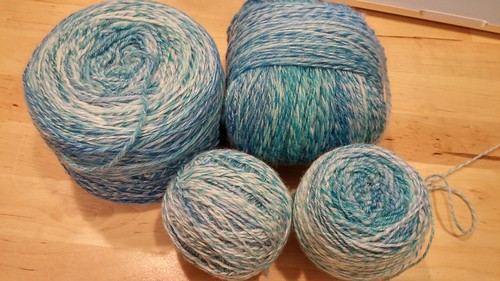 As you can see, I’ve tried a few times to knit with it. The yarn is consistent but thin (and of unknown yardage), soft with a nice drape. I tried socks (not sturdy enough), slippers (too thin), hats (didn’t like the resulting fabric, too drape-y), lace shawls (the lace got lost in the variegated colors). And so the yarn has been sitting patiently, awaiting an “A-ha!” moment.

And I remembered the blue yarn, and I thought, I really need to find a project for these skeins. The whole point of spinning is to be able to knit my own yarns, after all.

What I need is a project that I can use varying yardage for and adjust accordingly – something where you weigh the yarn and knit half, or something you cast off whenever you run out of yarn.

And I remembered that I have a bajillion patterns, and one in particular that I’ve always wanted to knit up. One that you could knit with any weight yarn (though it’s written for sock yarn), of any yardage, to get a scarf or shallow shawl. Something with drape, with movement, something that would allow the color variations to shine without being drowned in a lace pattern.

The Hitchhiker, by Martina Behm. 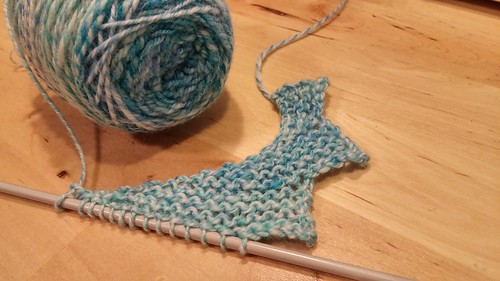 You want random? You got it. Mostly knitting and gardening, with some home improvements, pets, baking, family, and the occasional bad joke thrown in for good measure.
View all posts by wonkydonkey →
This entry was posted in Knitting & Crochet, Spinning and tagged handspun, Knitting. Bookmark the permalink.