In which I dip a toe in

I’ve been putting it off, but today I started the daunting task of organizing my sewing patterns. After moving the stuff into the house a couple years ago, I just stacked them all up in a corner because I was overwhelmed by the task of organizing it all. 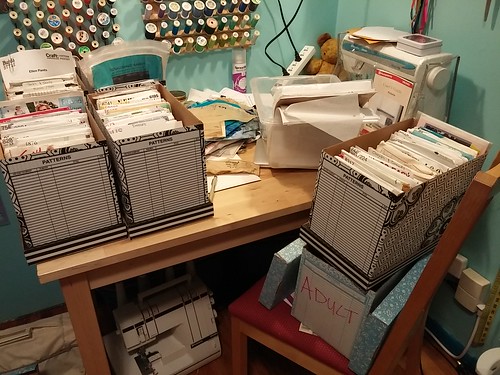 The patterns were crammed into three actual pattern boxes and several bags and assorted totes, and there were random pattern pieces shoved into corners of various containers. Several partially-sewing garments were mixed in. I bought a few new pattern boxes, and dragged everything out into the light for examination.

I began by sorting on a general level – dresses, pajamas, pants, jackets, costumes. From there I separated out the infant / child patterns from the adult patterns. Several times I re-arranged piles as I tried to figure out how to group them. Patterns that include both tops and bottoms were put into their own group. I have an entire box for pajamas, and another just for costumes.

After getting them sorted, I weeded out some of the craft / toy / doll ones — things I just can’t see myself making again. Many are alarmingly 80s, others are debilitatingly ‘country’ – neither are looks we encourage around here. I haven’t started cleaning out the clothing patterns yet, but there are definitely some that need to go (though many can be saved with better fabric choices). I also tossed a bunch of partial patterns, things I made decades ago and only had paper pieces for.

Now, in addition to seven boxes of newly-sorted patterns, I’m left with several partially-complete sewing projects: One set of nearly-all-sewn girls pajamas, one set of all-cut-out-but-nothing-sewn girls pajamas, one dress that is mostly sewn that I started for my daughter too many years ago and will no longer fit her, one summer skirt for myself that is cut out but not sewn, a jacket for myself that is mostly assembled but I can’t locate the pattern to finish it, and the parts for what I think is a summer dress for me but there are neither pattern pieces or directions anywhere to be found that match the shape. Hmm. These will be interesting to try and finish.

You want random? You got it. Mostly knitting and gardening, with some home improvements, pets, baking, family, and the occasional bad joke thrown in for good measure.
View all posts by wonkydonkey →
This entry was posted in Sewing & Quilting and tagged patterns, sewing. Bookmark the permalink.

2 Responses to In which I dip a toe in