Posted on October 6, 2015 by wonkydonkey

When I’ve finished knitting a project, I’ll say, “I’m done!” and the Mr. will point to the dangling yarns and say, “What about those?”

He has a point. I can’t claim to be done if the item still has ends to weave in and needs a good blocking… So, rather than tell you I finished the pink fingerless mitts and Poesie Socks, I’ll tell you that both projects are off the needles and in the Finishing Pile. Fresh on the heels of the pink mitts, I cast on a blue pair – also with my handspun. 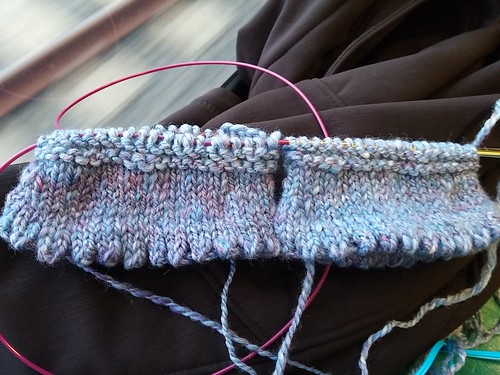 I kind of messed up a little bit with the pattern, but since I’m making them two at a time, it doesn’t matter because I made the same error on both.

You want random? You got it. Mostly knitting and gardening, with some home improvements, pets, baking, family, and the occasional bad joke thrown in for good measure.
View all posts by wonkydonkey →
This entry was posted in Knitting & Crochet and tagged handspun, Knitting, mitts, spinning. Bookmark the permalink.
%d bloggers like this: