I can’t remember if I blogged about it before, but we’ve been waging  a protest against a couple of people in the neighborhood. The short version: One man is raising pigeons in their backyard (“M1”), and another, unrelated man (“M2”) is feeding pigeons by throwing large amounts of food (not always birdseed, either – he also tosses cereal, cat food, crackers, pitas, etc.) onto the ground and sidewalk across the street. Whether they are the same pigeons, or just opportunistic ones, we don’t know or care.

There’s been a marked increase in pigeons (surprise, surprise) as well as rats and raccoon; at the same time, the smaller birds have fled the area because the bumbling, voracious pigeons bully them away from the backyard bird feeders once they’ve eaten all the food thrown on the ground by M2; and, the smell coming from M1’s backyard is enough to knock the freckles off a person so we have serious concerns about how he is handling the waste from his backyard coops. 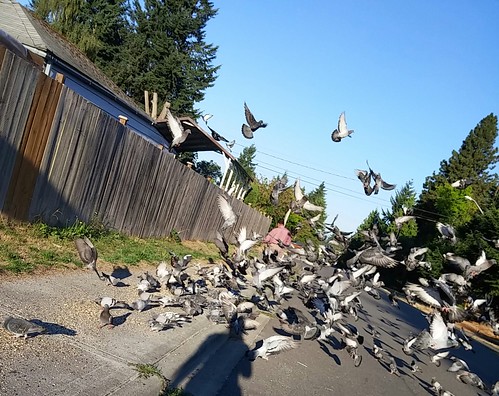 We filed complaints with the City against both M1 and M2, and it’s been slow and unrewarding. I confronted M2 in the street one day while he was feeding said flying rats, and he didn’t seem to understand my concerns about disease, poo, rats, and rotting food. The City decided to take no action, and M2 began throwing even more food onto the ground after I complained. So, I took it to the Public Health Department. 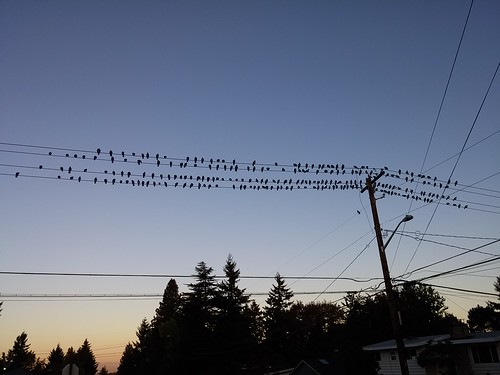 At first, even they didn’t seem too interested, but eventually they sent someone out to investigate. For real, in person, and not just a letter or drive-by “inspection”. I recently got a lengthy email update on the case.

M2 has been educated on the impact of leaving perishable food on the ground, and it sounds like he has decided to stop feeding the pigeons. He must be spending a small fortune on birdseed; he spreads most of it on the sidewalk across the street from his house. This is what is attracting the rats — an endless buffet! 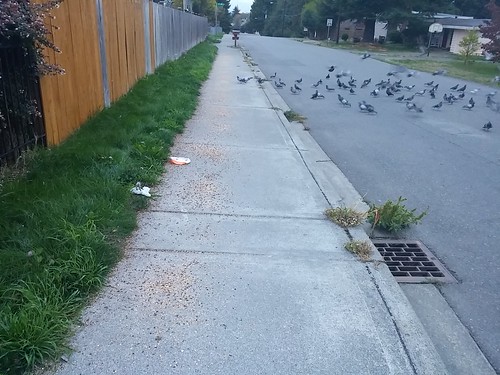 The health inspector toured M1’s backyard and looked at the coops. While the inspector wouldn’t tell me exactly what he found, he did tell me that he has educated M1 on proper disposal of waste and onsite composting, and will be making a followup visit. M1 is only allowed to have pigeons if he keeps them in their coops, which means he has to keep the coops clean and sanitary for the birds; this should help the noxious odor emanating from his backyard, and if he quits letting them out perhaps the breeding will be kept under control as well.

I cannot tell you how happy this makes us, and I cannot convey the amount of poop, incredible stink, and rodent problems that have plagued the neighborhood because of these two people. If they lived in the country with more space, it wouldn’t be a big deal — but we are not in a rural area, and hundreds of pigeons make a huge mess on the surrounding cars and houses; and rats don’t respect property lines.

You want random? You got it. Mostly knitting and gardening, with some home improvements, pets, baking, family, and the occasional bad joke thrown in for good measure.
View all posts by wonkydonkey →
This entry was posted in Random Thoughts and tagged neighbors, pigeons. Bookmark the permalink.
%d bloggers like this: