Just a bit of catch-up

That’s the sound of the days as they fly by. Sheesh.

We pretty much have the house put back in order, random left-behinds that she actually wanted have been gathered up and shipped to the youngest fledgling, and the remnants packed neatly and stored in her old room – which is now also being used the house the grandchild’s toys. We have settled into a monthly “overnight at the grandparents” routine, which is amazingly fulfilling. I love that little nugget so much it hurts, and I enjoy every minute we get to spend with her. It takes some of the echo out of the empty nest.

Several friends of mine have lost loved ones recently, and it really makes you stop and appreciate what you have in your life, that reminder that it can be gone in the blink of an eye.

It also makes me recommit to taking better care of myself; I have just started a course of chiropractic treatment to resolve some shoulder pain that I have been just ignoring for several months. Turns out, my posture has really deteriorated over the years (not surprising) and I’m feeling the effects. Quality of life and all that, I’m tackling this issue before it gets worse.

Plus – can’t have shoulder pain interfering with my crafting time. Ya know.

Speaking of: I finished that grey mystery wool – it’s loosely plied and washed, and it bloomed much more than I expected. While spinning I was certain I was going to end up with DK-weight yarn, but it is a bouncy worsted weight, easily. Got quite a bit of yardage, too; it isn’t the softest wool I’ve spun, but it isn’t too bad. Maybe a hat would suit it. Or some seriously warm slippers.

And I cast on a sock. Yes, just one. It has a cable in the pattern and I’m doing the leg and heels solo, then I’ll put both on one needle to finish the feet (to ensure they are the same size). I had a bit of a misstep (pun intended) with the first attempt; I had grabbed needles a size smaller than what I typically use, and didn’t do a gauge swatch. You know what happened. Anyway, since I wanted the sock to fit an adult human, I had to start over on larger needles and it fits just fine now. I wish I could say lesson learned, but I’m pretty sure I’ll make the same mistake again at some point. 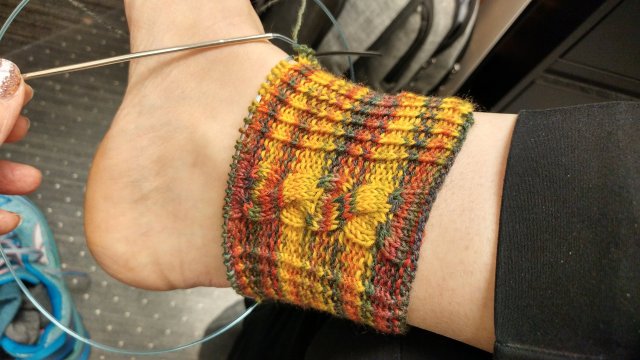 You want random? You got it. Mostly knitting and gardening, with some home improvements, pets, baking, family, and the occasional bad joke thrown in for good measure.
View all posts by wonkydonkey →
This entry was posted in Family nonsense, Knitting & Crochet, Random Thoughts, Spinning. Bookmark the permalink.

1 Response to Just a bit of catch-up